“Fast, fun and easy to sail”; these were the requirements for “Katie G”, an exciting 40-foot family cruising boat built by Eric Goetz Custom Sailboats for Eric’s own use, and named after his daughter. The design is strongly influenced by the fresh approach of unrestricted Open Class shorthanded offshore racers, which contributed such features as waterballast, twin rudders, the plumb stem and the rig.

Waterballast, in two fore-and-aft tanks each side, increases sail carrying power for speed and reduces heel and dampens motions for comfort. The twin, canted rudders present a near-vertical control surface on either tack when heeled and provide great steering control when running and reaching, unlike a single rudder whose steering effect is reduced as heel increases. Twin rudders have proved their effectiveness on long distance Open Class racers such as our own 60′ BOC boats “DURACELL” and “GRINAKER”. The plumb stem, as well as imparting a certain “look” to the boat, makes for a fine, wave-piercing entry and lengthens the waterline, improving speed and easing motion. Plumb stems also provide greater reserve buoyancy forward, for a given length, and better support anchor and headstay weights.

The sail plan is set up for fast sailing and easy handling. The biggest jib is a number 3, just overlapping for easy tacking without winch-grinding (if you time it right), and is set on a fractional, furling headstay. Asymmetrical spinnakers, one each hoisted to hounds (950 sq.ft) or masthead (1500 sq.ft), are tacked to the spinnaker pole which extends four feet beyond the bow and is retained in a yoke on the bow pulpit when reaching. The longer pole used conventionally, projects the asymmetricals when running. The fully battened mainsail uses a traveller abaft the tiller with the sheets close at hand to the helmsman. Swept-back spreaders and full-beam chainplates make for a well-stayed, low-compression spar, with runners needed only in extreme conditions, when they are brought back to tracks on deck, “Star”-boat style. Mast and sail control lines lead to jammers and winches on the house-top each side of the companionway and sheet winches are well forward in the cockpit, handy to the helmsman and easily reached from the protected position behind the dodger. The dodger itself has a fixed arch, allowing the forward and after sections to be folded independently and forming the basis for a cockpit tent.

The cockpit has some practical features aimed at cruising enjoyment. The two middle pushpit stanchions form a ladder which swings out over the transom between the twin rudders making a swimming platform over the water, an extension of the cockpit sole. A door in the port side of the transom contains a cylindrical Force 10 propane barbecue which slides out on a track to hang over the water for cooking meals at anchor. A hand shower is kept in a locker opposite, on the starboard side, so you can stand on the swimming platform and shower off salt from swimming or sand from the beach. The low coamings in the ten foot long cockpit are specially sculpted for comfortable lower back support. The port seat gives access to a large cockpit locker, and behind the tiller, the cockpit sole and seats open up to give access to a large “trunk” for stowage of the inflatable dinghy, “cruising toys” and other water? resistant gear. This trunk area is watertight to the interior of the boat.

“Katie G” is tiller-steered, in keeping with the “big dinghy” approach of her hull and rig. The rudders are steered through a simple custom quadrant and cable system. The rudder blades are in trunks allowing the optimum amount of rudder to be down at any time; the windward rudder can be raised to eliminate its drag and there is adjustment for optimum toe-in or toe-out. The deckhouse has four opening ports each side, and a hatch over the saloon. The forward face of the house has another hatch in it and slopes gently to the foredeck, essentially adding usable deck space. Up in the bow, the foredeck dips below the sheer, recessing the furling drum and the custom carbon-fibre bitts each side (in place of bow cleats). Anchor, mooring and dock lines run through fairleads in the bulwark left by the recessed deck. There is a vertical anchor locker just aft of the dip, to port.

Aft, there is a comfortable, well-ventilated double cabin to starboard, and the head is to port. The engine, a 35 hp Yanmar diesel, is under the galley island, sharing its compartment with the ballast pump, and other ancillaries are under the central part of the table. The stove and the counters each side of it are part of a semicircular, gimballing unit at the forward end of the galley. This layout makes for a safe galley; much safer than one in which the stove is either to windward or to leeward of the cook. The fridge/freezer at the aft end of the counter completes a very secure galley. The nav. table and wet? locker (with seat) are opposite the galley, to port. In the saloon, there are long settees each side which will make good sea-berths. Fuel and water tanks are beneath the settees in integral tanks. As one can only walk through the saloon on the port side, the starboard settee makes a nice “backwater” where adults or children can entertain themselves undisturbed by through-traffic.

The forward cabin has a large hanging locker to port, with a wash-basin and stowage to starboard. There is a seat between the berths with stowage underneath it as well as under the berths. The forward bulkhead is a water-tight collision bulkhead.

“Katie G” is beautifully built of Unidirectional S-glass and Epoxy resin with Airex foam core in the hull and Divinycell in the deck. Framing is mostly formed by the bulkheads and furniture, except in way of the keel. All ring bulkheads and frames are capped with carbon fiber. The joinerwork is all of light cored construction.

Waterballast is divided into two tanks each side. They are filled through a scoop that hinges on its aft side and opens like a reversed “Elvstrom” bailer. The ballast water is then diverted to the desired tank by means of guillotine valves and an ingenious system of integral ducting developed by Goetz Custom Sailboats. The aft windward tank would be filled for fast reaching, and both tanks filled for windward work. Before tacking, the leeward tank is filled from the scoop, the boat is then tacked and the new leeward tank is emptied through “bailers” at the low point of each tank. The hydraulic ballast controls are located in the cockpit in reach of the helmsman. The 2,500 lbs of water-ballast each side increases the righting moment by 66% at 20o of heel, so one can see why it has such a marked effect on performance.

We could not have designed “KATIE G” without creative input from the able people at Goetz Custom Sailboats, Hall Spars and GMT. 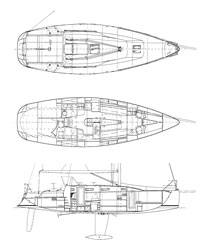